skip to main | skip to sidebar

Camden, England, and the sunken ship of The World's End 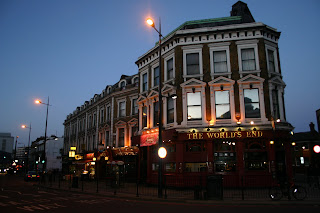 As I arrived in the dusky basement, time was already amassing aftergrowth; I was late, and everbody was as carved as lambs at the slaughterhouse. Lead down there by some Swede or Turk or incomprehensible Cockney cowboy, I thanked her and then shrank- they were already into their fifteenth jägermeister shot, and bellowing like walruses to reach the hundred mark. Hungry Centurions. My comrade, Piggy Stardust, had fore-warned me this would be happening- they had reached 200 hundred beer shots the week prior, maybe twenty-five penguins the week before, and now wanted to try for the 'big guns'.
"One hundred guzzles of that brown death goop," I assured myself as I heard their retches and witnessed their gratuitously withered eye sockets, "Is never going to happen".
-and as I descended those stairs, like the arrival of the sooth-sayer, my prophecy spoke truths.

It was the first time in over two years since I had set gaze on my dastardly friend of childhood, Piggy Bardust, the soldier from Mars. And by the look of him, it had been two years since his gawking features set gaze on any type of showerhead, unless it had been one which bilges out mud.
As I neared him, he growled and staggered upward, aghast, throwing his arms in the air and cheering my name, or praying for rain, or something, at least, into the heavens. My welcoming into the fen.
Alas, this chivalrous greeting was as short lived as a midget drug overdose- *BAM* out of nowhere, a girl alledging faction as his girlfriend, mowed him over and on to a metal bucket, in a fierce spear tackle, as only an Australian woman knows how.
"ARRRR BLUUUUG!!!"
Piggy was groaning, unholy, un-soldier like- it coupled with the wincing trepidation building in my psyche, churning in my system, trying to prepare for the days ahead.
Suddenly, in a wild dawning of the damned, Piggy cracked one bloodshot peeper open, registering my outstretched hand cast out as a ballast, and took the leverage of welcoming. A smiled crept on to his hairy face, he cringed from his wound by the bucket, and he shot me a "Mate... how ya doin'?" We were back.
Within one minute of this rekindling, the jäger's were pouring, severing the brains from the brain stems of these already twisted bar barbarians. Needless to call it, nobody lasted the hundred shots. Piggy was vomiting over my shoes and his own hallway within the hour, leaving me to disappear out into the Camden night... but hold the train, we are jumping ahead here...

This was the basement of The World's End. World's End- the illustriously touted 'metal bar', in the epicentre of dishevelled ol' London, opposite the Camden Eye, hour's past closing time. After forging my way past the Cockney Turk to the downstairs nightclub (The Underworld), a club of reknowned seediness, I was haggling the locals for info. This was a venue infamous for a crime against drum-kits, commited by Kurt Cobain in the early nineties- a club where the cockroaches looked better than the indie ladette patrons, and where instead of telling you to watch out for the urine puddles torrenting the dancefloor, the bouncers yelled 'SURF'S UP!' 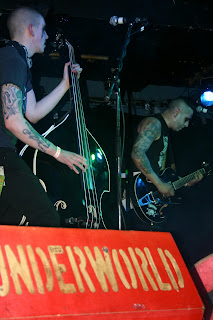 Swines. But, to the defence of the World's End grimployees, they were trapped like galley slaves, toiling day and nights, twenty-four-nine in this limey mug-palace, and upon finishing hour, they would slurp on beer and vodka until midday. Then, remarkably, day after day, they would rise and purge and work again. Time was a bending, shifting vortex (as one may expect at the end of the world). Their concaving cerribelums was proof enough. All the crew here, the bearded Frenchman, the Manga charicitured Swede, and Lula, the Spanish (about as sexy as stricknyne) waitress, were all lost up to their nostrils in work and booze. But not me. Oh no, I was on holiday, and I would be spending it footloose and frenzied. Living in the upstairs portaloo my fine friend called a room, (which I was later informed were the slave chambers back in the bad old days of segregation), I rang my week out, living it up and out in The World's End. With a death-clattering cough and a camera, I crawled along the streets of Camden, searching for Amy Winehouse's bloated corpse to snap and make my millions.

Next days, ailing from algoes and aches which could have only been born in a murky wonderland like the Underworld, I was blessed with the week's finale, the final blazing firework display of atrocity. It came one morning around 6AM. A Thursday I believe, as I dreamed haplessly of deserted paradises. Amid this sickened visage, an eclipse swept across my desert sun. Awaking, I found the fattest, hairiest, drunkenest crazy meat torpedo of a World's End worker named Frank or Dave or Freddy, proceeding to try and get into my bed and pass out. At this moment, I was IN THE BED, and believed I would be crushed within seconds. A flabby pick-up truck of flesh barrelling towards me, I squawked, "DAVE, YOU FOUL FUCKER, WATCH OUT!!!" Then the proliferating bag of protoplasm plunged down, in a volcanic lunge, to fall asleep like a wee baby under my covers. I was standing on the bed, woken by this fearful attack, and thanking the moon he didn't shatter my spleen in my slumbers. Now, how to get rid of him? This took some serious thinking, not to mention water and beer pourage over his gargantuan head. When he finally lumbered off, naked as the new day calling, I felt the sheets- they were wet, and yes my friends, they were yellowed. I felt a dirge inside me rising.
"Really? Could he...?"

By the end of the week, I left with a bag full of sopping wettened fabric I previously called clothes, a ruined copy of Dostoyevsky, a bile-stained wallet 300 Pounds the lighter, and a headache the weight of Pavarotti's tumour.
But if I were called back into Camden, the fluctuating, multi-faceted, ever-astounding suburb hounding LIFE LIFE LIFE into all corners, then yes, I will go. If only to break Piggy out of his dungeon. 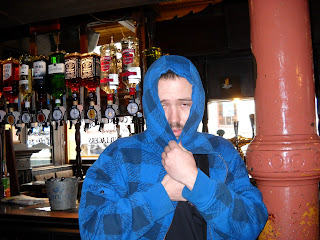 Posted by mattgarrick at 3:34 AM